Tonight at 7 P.M. ET, the Florida Panthers will try for the fourth time this season to come away with their first victory.

They’ll drop the puck between the Florida Panthers and the Philadelphia Flyers in Wells Fargo Center, in Philadelphia, PA. Florida hasn’t earned a victory since last season, and are coming off a 0-2-0 homestand. After tonight’s game, they’ll hit the road to play the Washington Capitals on Friday night.

The Flyers are 2-3-0 in the early going and are closing up a quick two-game homestand. They’ll hit the road and play the Columbus Blue Jackets on Thursday night.

When We Last Met

On March 4th last season, The Florida Panthers defeated the Flyers, 4-1 in front of 14,428 at the BB&T Center.

Evgeni Dadonov scored two goals, Aleksander Barkov had a goal and an assist, and Jonathan Huberdeau lit the lamp against Philadelphia goaltender Petr Mrazek (22-of-26). Goaltender Roberto Luongo stopped 39-of-40 shots in the victory, which pushed the Panthers to 32-25-6, one game over ‘real’ .500. 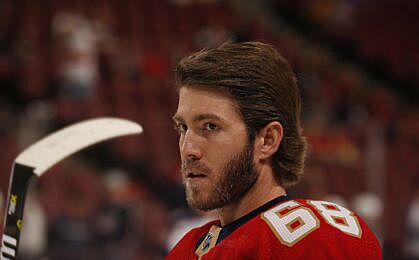 SUNRISE, FL – OCTOBER 11: Mike Hoffman #68 of the Florida Panthers skates on the ice during warm ups prior to the start of the game against the Columbus Blue Jackets at the BB&T Center on October 11, 2018 in Sunrise, Florida. (Photo by Eliot J. Schechter/NHLI via Getty Images)

“Every time we take the lead it’s tough when the other team ties it up right after. That’s a pattern that’s got to change.” – Panthers coach Bob Boughner, via NHL.com.

The Flyers last game action was also on Saturday, a 1-0 loss to the defending Western Conference Champion Vegas Golden Knights.

Ryan Carpenter assisted Cody Eakin with less than two minutes of regulation remaining for the only score of the game.

Brian Elliott, who stopped 20-of-21 shots, earned what we call a ‘hard-luck loss,’ but the Flyers couldn’t solve Knights netminder Marc-Andre Fleury either. Fleury faced and stopped all 26 Flyers offerings at the net through the game.

“It stinks walking away with nothing to show for it. You don’t get moral points for a loss but we played a [heck] of a hockey game today. Not much there I’d want to change. … This is one of those nights, tip my hat to Fleury in net.” – Flyers coach Dave Hakstol, via NHL.com.

Florida is 36-45-7-7 all-time against the Flyers. The Florida Panthers .453 point percentage in head-to-head play ranks as their 22nd best against all teams.

This Day in Florida Panthers History

The Florida Panthers own a 4-2-2-1 record on October 16th through their history. In their only meeting on this date against the Flyers, in 2009, the Panthers earned a 4-2 victory.

Stephen Weiss had a goal and an assist, while Radek Dvorak, Nathan Horton, and Steve Reinprecht each also lit the lamp in support of Scott Clemmensen, who stopped 25-of-27 for the win. 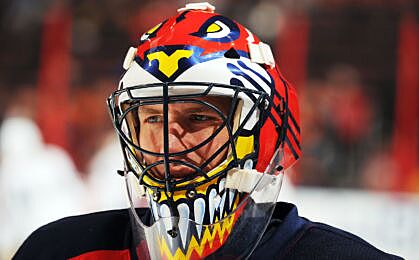 SUNRISE, FL – JANUARY 24: Goaltender Scott Clemmensen #30 of the Florida Panthers skates on the ice prior to the start of the game against the Colorado Avalanche at the BB&T Center on January 24, 2014 in Sunrise, Florida. (Photo by Jeffrey R. Sanzare/NHLI via Getty Images)

Mike Matheson will miss the game due to a two-game suspension for a dirty hit.

Roberto Luongo is out for probably around four weeks due to an MCL strain.

Derek MacKenzie’s upper body injury may keep him out of tonight’s game as well.

Goals: Evgenii Dadonov’s next goal, his 40th, will tie him with Juraj Kolnik, Reilly Smith, and Brandon Pirri in 37th all-time. Aaron Ekblad‘s next goal will be his 54th and will tie him in 21st with Tom Fitzgerald and Tomas Fleischmann. 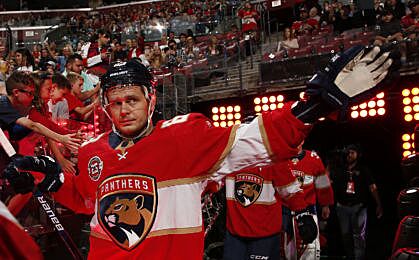 SUNRISE, FL – OCTOBER 13: Evgeni Dadonov #63 of the Florida Panthers is greeted by fans on the way out to the ice prior to the start of the game against the Vancouver Canucks at the BB&T Center on October 13, 2018 in Sunrise, Florida. (Photo by Eliot J. Schechter/NHLI via Getty Images)

Assists: Dadonov’s next assist will move him past Shawn Matthias into a tie in 49th place with Niklas Hagman. Nick Bjugstad‘s next helper will give him 98, tying him with Bill Lindsay in 18th all time. Barkov’s next will be his 151st, moving him out of a tie with Jay Bouwmeester and into sole possession of 10th on the all-time list.

Wins: James Reimer has 40 wins with the Panthers, tied in fifth with the aforementioned Clemmensen. His next victory will leave him two shy of #4 on the list, Mark Fitzpatrick.

Assists: Dadonov, Trocheck, and Keith Yandle are all tied with two. 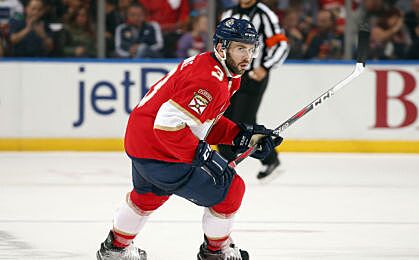 SUNRISE, FL – OCTOBER 13: Keith Yandle #3 of the Florida Panthers skates for position against the Vancouver Canucks at the BB&T Center on October 13, 2018 in Sunrise, Florida. (Photo by Eliot J. Schechter/NHLI via Getty Images)

Like Philly Cheese Steaks and Freedom? So does this man.

Next: Mike Matheson Suspended For Next Two Games