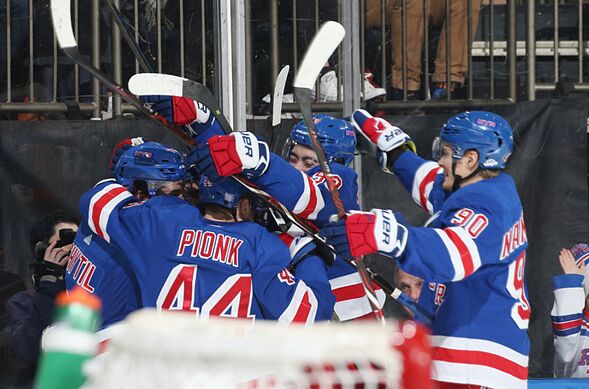 This was a solid 4-2 win for the New York Rangers over the surging Florida Panthers. The Blueshirts rebounded nicely from an embarrassing loss to their arch-rivals on Thursday. It was a total team effort with contributions from every Ranger player.

The Florida Panthers are an enigma. With a lineup full of top draft picks, a bevy of skilled players and a Hall of Fame goaltender, they are always a  favorite of the preseason prognosticators. Inevitably they falter and miss the playoffs. If this game was any indication, they are destined for the same.

In the meantime, the Rangers were nobody’s pick for postseason contention.  Yet, 20 games into the season they are two games over .500 and in a playoff position. The Ranger world was waiting to see how they would react to their ugly loss to the Islanders and if there is one thing we have learned this season, it’s that they learn from their setbacks.

If a game could be called a team effort, this was the one.  David Quinn was forced to revamp his forward line combinations due to injury and the acquisition of Ryan Strome. Brady Skjei, arguably the team’s top defenseman, was benched for the first time this season. Brendan Smith came out of the doghouse to score a goal and defend with grit and a degree of nastiness that was missing in Brooklyn.  Of course, when he was called on, Henrik Lundqvist rose to the challenge and stopped the pucks that had to be stopped.

Scoring opened barely three minutes into the game when Filip Chytil beat Roberto Luongo on the short side off a brilliant rush by Kevin Hayes.

It was Chytil’s third goal in three games, the first time a teenager has ever done that for the Rangers.  Florida answered right back in 1:37 when Mike Hoffman lasered a one-timer from the faceoff circle past Lundqvist. The goal extended his team record point scoring streak to 15 games.

The Rangers got themselves in trouble with two consecutive penalties, the second  a needless interference penalty by Vinni Lettieri in the neutral zone. Florida made them pay when Aaron Ekblad scored at the ten minute mark on another one-timer, this time from the top of the faceoff circle.  That goal landed Lettieri on the bench for the rest of the period.

Chris Kreider forced a turnover, Lias Andersson got to the open puck and fed Smith who beat Luongo with a wrist shot just under the crossbar.  Let’s just say that Luongo was not having a good night.

The first period ended in a 2-2 tie with each team enjoying odd man rushes and penetrating the offensive zone at will. This was a dangerous style against the offensively loaded Panthers, who outshot the Rangers 13-12.

The second period featured much tighter play from both teams. Two and a half minutes into the period, Vlad Namestnikov finally got some puck luck.

This goal was scored off a Zibanejad faceoff win and required a review.  The on-ice official called it a goal and the situation room was unable to see otherwise.  This was only Namestnikov’s second goal of the season.

The Rangers were outshot in the second period 14-5, but the period seemed more even.  The big difference is that the Panthers actually shoot the puck and hit the net unlike the Rangers who had good offensive zone possession, but had a hard time getting shots on goal.

The third period was a defensive effort as the Rangers did a good job at putting up a barrier at the blueline. Still, the Panthers kept putting shots on Lundqvist and he played his best in the that period. At 7:34, after a dynamic shift by Chytil, he drew a tripping penalty on Vincent Trocheck.  The Rangers converted on only their second powerplay of the game and it was Chris Kreider who scored.

Neal Pionk did a nice job moving the puck up ice and fed a streaking Kreider who snapped the shot past Luongo.   With a two goal lead and about ten minutes left in the game, the Rangers went into a defensive shell.  They held their own until Florida pulled their goalie with three and a half minutes left. After that, it was fairly chaotic and Florida spent most of the remainder of the game in the Rangers zone. The Panthers poured eight shots at Lundqvist, but the Rangers played it like a penalty kill and with a disciplined effort, were able to withstand the attack. The Panthers outshot the Rangers 14-7 in the third period for a game total of 41.

Quick Strikes: Martin St. Louis pays a special visit to Tampa and the Lightning defeat the Panthers
Sabres’ third-period meltdown ends with another loss to last-place Panthers – The Buffalo News