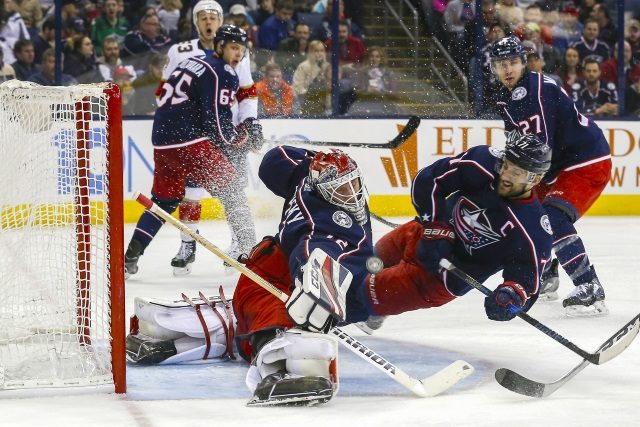 Panthers to look for a No. 1 goalie?

George Richards of The Athletic: The Florida Panthers could be looking for a starting goaltender at the trade deadline or during the offseason.

They could be looking to go big with their main target possibly being Columbus Blue Jackets pending free agent Sergei Bobrovsky.

Bobrovsky owns a condo in downtown Miami already, and there have been rumors already that Bobrovsky and fellow pending UFA Artemi Panarin have interest in playing in the state of Florida.

One or both could be dealt at the deadline, and they won’t be considered a package deal.

Bobrovsky could be looking for Carey Price type money – eight years at $10.5 million per.

The Panthers need to upgrade their goaltending.

James Reimer has two years left at a $3.4 million cap hit. They could look to trade Reimer or buy him out. If Luongo retired, they could keep Reimer.

The Hurricanes could look at moving Hamilton and Ferland

Sportsnet: Carolina Hurricanes defenseman Dougie Hamilton could be joining the rumor mill according to Elliotte Friedman.

“ name I’m curious about is Dougie Hamilton,” Sportsnet’s Elliotte Friedman said during the Headlines segment of Hockey Night in Canada Saturday. “They have four right-shot defencemen, they’ve been asked about Hamilton. If you’re willing to come back to them with a score I think that they would consider doing it.”

The Hurricanes could also be looking at trading pending free agent Micheal Ferland as contract talks are not close and they can’t afford to lose a player for nothing.

“ team that has said, ‘We cannot be in a position to lose an unrestricted free agent for nothing’ is Carolina and I believe that’s why a lot of talks have heated up on Micheal Ferland,” Friedman said. “I don’t think they’re anywhere close between the team and the player.”