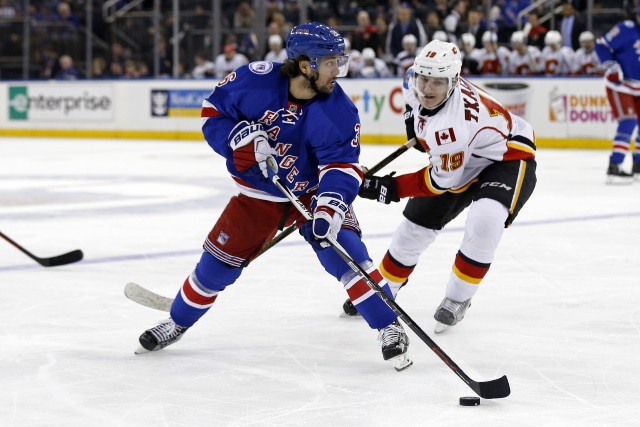 Pierre LeBrun: The Florida Panthers hope they are ready to take a run at Columbus Blue Jackets pending UFAs Artemi Panarin and Sergei Bobrovsky. Yesterday’s trade givens them some added flexibility to do so. They could hold out until eventually July 1st or they could verify in ahead of the trade deadline to see if it tends to make sense.

Waiting around until eventually July 1st tends to make extra sense as they would not have to give up assets to purchase them.

Chris Johnston: Tallon when asked if they could trade freshly acquired Derick Brassard ahead of the trade deadline: “performance will determine what we do with these players.”

David Pagnotta: The Panthers have by now began hunting at relocating Brassard. Don’t know if something is not imminent. He will be traded ahead of the deadline.

Chris Nichols of Nichols on Hockey: Elliotte Friedman and Jeff Marek on 31 Thoughts: The Podcast we’re talking about the New York Rangers.

“Kreider, Hayes, Zuccarello, those are the noticeable names,” began Marek, who then added McQuaid.

“McQuaid for sure,” agreed Friedman. “If I was an NHL group that assumed I could win and desired some edge, I would be heading following Kreider. But I could see the Rangers wanting to preserve him. This is meant to be a a person-yr detail, and then they are heading to be in the free of charge agent marketplace. So I speculate what they are heading to do there. But I actually like Kreider. I like him a lot. I think he’s a dude who just runs more than persons and you require that.”

Freidman adds that he thinks the Calgary Flames could be a person of the groups interested in Mats Zuccarello for added depth, and the Edmonton Oilers have unquestionably looked at Zuccarello and maybe Chris Kreider.

Friedman when Marek delivers up the Colorado Avalanche and Kevin Hayes.

“Yes, but I’m not sure they are heading to do that,” mentioned Friedman. “And I think also when Duchene gets set, then Hayes is heading to come up. And he’ll get some interest.”