VANCOUVER — Loui Eriksson had a goal and two assists Sunday, leading his Vancouver Canucks to a 5-1 win over the Florida Panthers.

Jacob Markstrom stopped 23-of-24 shots for the Canucks and Roberto Luongo put up saves 31 for the Panthers. 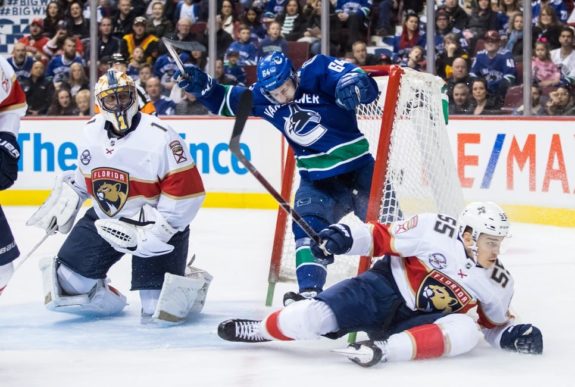 Despite playing for the visitors, the former Canucks netminder received raucous cheers of “Louuuu!” from the crowd every time he stopped the puck.

Vancouver out worked Florida from the beginning, keeping the Panthers pinned in their own end for long stretches.

The work paid off 12:32 into the second period when Eriksson opened the scoring.

The left-winger picked off a pass from Mike Hoffman at the Panthers’ blue-line and drove into the offensive zone. Eriksson finished with wrist shot in behind Luongo for his eighth goal of the year.

The Panthers responded early in the third, just as Vancouver’s Nikolay Goldobin was released from the box after a hooking penalty.

Using a screen from former Canuck Jared McCann, Vatrano popped a backhanded shot in past Markstrom to tie the game.

Hutton put his team up again less than two minutes later, flicking a snapshot past Luongo. The Vancouver defenceman had not scored in 30 games.

Boeser put away an empty-netter after Luongo was pulled with 2:27 to go in the game. Eriksson was credited with a helper on the play.

He added another assist when Beagle scored an empty-net goal with just 38 seconds left.

Granlund finished up the scoring, putting a snap shot past Luongo with 11 seconds on the clock.

Canucks fans showed on Sunday that they hadn’t forgotten — or forgiven — what happened when the two teams last played in mid October.

The matchup in Florida saw Panthers defenceman Mike Matheson hit Elias Pettersson and toss him to the ice. The Canucks’ rookie star left the game and was sidelined with a concussion for two weeks.

There was no penalty on the play, but the league later suspended Matheson for two games.

But it was Panthers centre Michael Haley who dropped the gloves with Canucks defenceman Erik Gudbranson.

Officials allowed the pair to swing at each other for a few minutes before Gudbrandson fell to the ice. Both were handed five minute penalties for fighting.

The Panthers continue their Canadian road swing on Tuesday when they visit the Canadiens in Montreal.

The Canucks will be back in action on Wednesday, hosting the Edmonton Oilers.